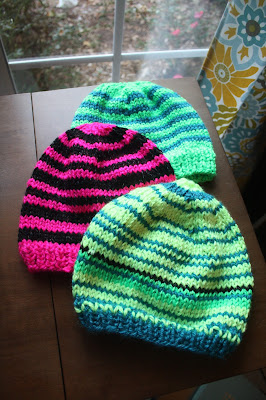 I've had this big sack of leftover scraps from my previous set of charity chunkeanies just waiting and begging to be made into some awesome scrappy hats! Three done, and at least one more and this sack will be depleted! Woohoo! I've knit so many charity hats this year that I no longer need a  pattern. For these I used Red Heart Reflective yarn leftovers, size 8 needles, and cast on 64 stitches. After about 6 inches of hat, start decreasing! Easy peasy! 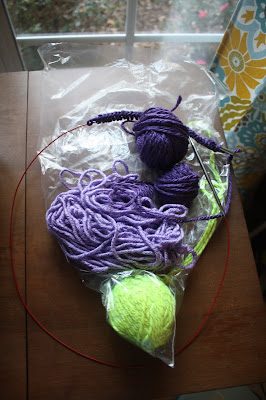 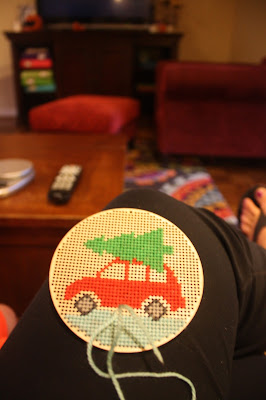 So .... one of my goals for the year was to "clear out" an entire bin of needlework projects. HA! Oh well--I am itching to do some handwork again though, and still have four of these adorable ornament kits left to stitch up in my stash. So I'm starting "sunday's stitches" back up again in the hopes of restarting my needlepoint mojo!
See my progress from week to week on past sunday's stitches.
at October 23, 2016 No comments:

So this is a project that has been hibernating since January ... because I realized my gauge was totally off. Looking at the pattern now, nine months later, I realized I was using a needle size that was larger than the pattern called for. Well, duh! So I ripped back and started over with the right needles. And then I got to the thumb gusset and couldn't deny that the whole thing was way too big. So I ripped again. Fingers crossed that third time will be the charm! I have to admit, I have high hopes for this pattern because I really like this idea as a way to show off the oodles of self-striping sock yarn I have and LOVE. And I've had this pattern in my library since Christmas last year, so it's high time I actually made it. It's a little big, but the pattern calls for a liner so I think it'll work out. 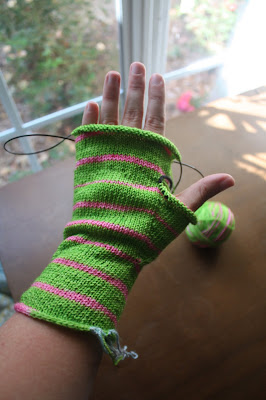 And in other, "picking up ancient WIPs" news, I decided to pick up this bad boy again. This is a simple, striped garter stitch cowl knit on the diagonal. I love patterns like this, and thought it would be a cute way to knit up some of my Malabrigo stash. This project I started in August, but had been intending to make since last winter. So not as bad as the mittens in terms of time on the needles, lol! 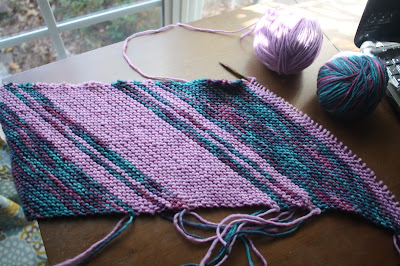 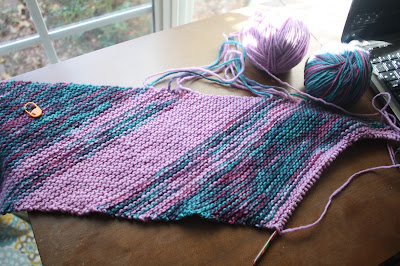 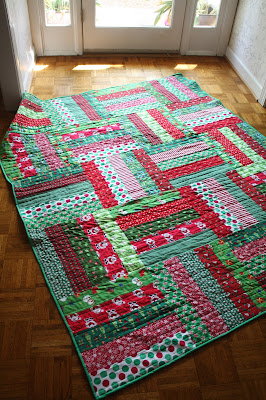 Sooo ... this one took me longer than planned. I was looking back at old photos, and found photos of my progress piecing together this quilt top back in March. Oops. I know I finished the top later that spring. Labor Day weekend I finished quilting it .... and now more than a month later it has a binding! The one positive? This hands down is my best job machine quilting a binding. So I don't forget for later purposes: I cut 3" strips for my binding, attached with 1/4" seam allowance like I would if hand sewing, and then slowly topstitched as close to the "ditch" as possible around. Worked like a charm! 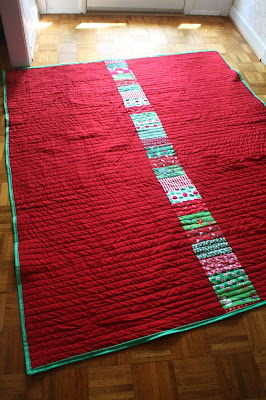 This quilt was also my first "pieced" backing. I was economical and used leftover scraps to extend my flat sheet I was using as my backing fabric. I am actively ignoring the imperfections. The places where I have puckers and folds. Next time I'm going to try using spray adhesive and some other tricks I've read about for avoiding those problems. A walking foot would probably help too. Until then, I'm reminding myself of all the cultures that purposely craft with mistakes in their work. 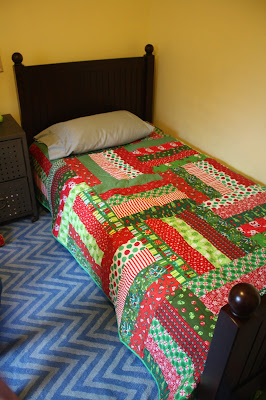 what I knit this summer 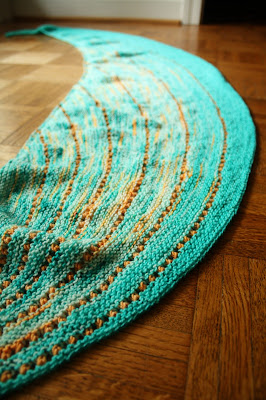 Is it horrible to be catching up on summer knitting blogging in October?? Sigh. Between work, normal fall mayhem, and counting thousands of Box Tops as the "Box Tops Lady" for my daughter's school, the poor blog-o has been severely neglected. But it would be a crime to not show you this finished project--this is my finished Pure Joy shawl that I worked on while we trekked to Ship Island in July.  It didn't take long to finish--this one I wrapped up on August 2nd and was seriously a JOY to knit. I would make hundreds of these just for the joy of knitting them, but the only thing holding me back is my failure to really wear shawls/scarves. I'm more of a cowl kinda girl. 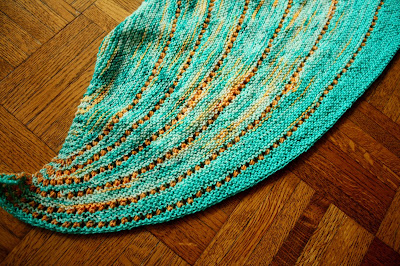 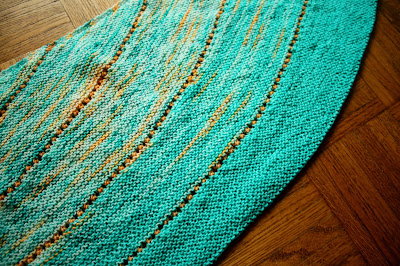 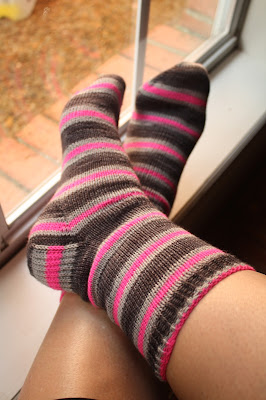 My first ever pair of toe-up socks with a heel flap! (definitely my new favorite way to knit socks! and a Love Your Library project too! double win!) 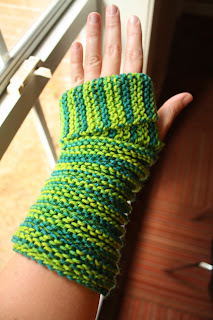 And a fun pair of fingerless gloves that I'll need to wait at least another three months to wear, lol.
at October 11, 2016 1 comment: 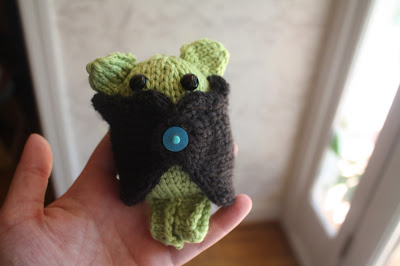 Boo! Where did September go?? That's what's scaring me these days, not these adorable bats! I've had this bat pattern in my "must knit someday" list for at least four years. Now that we're well into October, we're in full-on Halloween fever in our household and I decided it was time to knit a pair of these cuties! 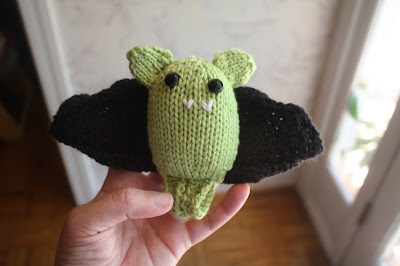 Pattern: Boo the Bat by Anna Hrachovec (link to my Ravelry project page)
Yarn: Knit Picks Swish Worsted in Parrot (12 grams for one bat), Caron Simply Soft in Black for wings (also approx. 12 grams for one bat)
Needles: size 5
Mods: NONE! I've always loved Anna's adorable patterns, and they work up sooo quickly. This may inspire another temporary toy-knitting craze for me! 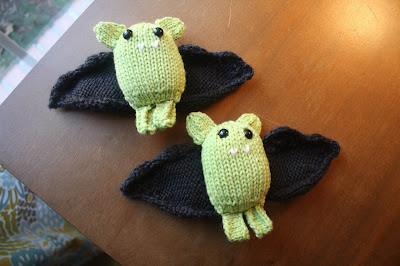