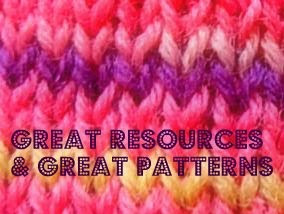 Throughout this month I've been writing a series of posts about great knitting resources for the Golden Triangle Knitting Guild. I'd thought I'd share these here as well ... these days it's hard to keep up with all the amazing online magazines, newsletters, and other sources of fabulous (and sometimes free!) knitting patterns that can be found online. So this series is my attempt at profiling the best of those resources. You can access all the posts in this series through the "Great Resources & Great Patterns" button on my sidebar!

Coming soon ... more adventures in knitting. I'm experimenting with some colorwork in my felting (a first for me!) and will attempt my first ever steek ... I'm nervous to say the least! Oh, and the cupcakes? Total success! I thought the marshmallows would harden after a few days, but if anything, they got soggy. So definitely eat them up within a day or two!
at July 14, 2010 No comments: 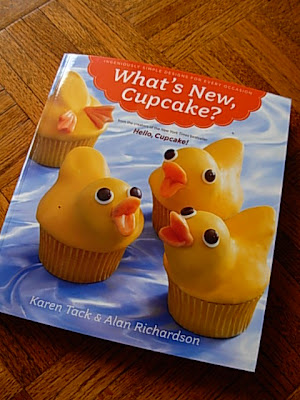 What's new? Well, a lot, in a year! But mostly just the excitement of preparing for Baby-J's (wow, this time last year she was known only as impending-July-baby) first birthday! Which has inspired some manic (as usual) birthday crafting, of course. And nothing better than a birthday to warrant some fabulously decorated cupcakes! I love eating cupcakes, but honestly hadn't put much effort into decorating them until my sister introduced me to the book, Hello, Cupcake!, by Karen Tack and Alan Richardson. Their awesome cupcakes inspired me to track down their sequel, What's New, Cupcake? and actually put a little more effort into one of my favorite tasty treats.

Soooo many cupcakes caught my eye in this book (more on that later), but this adorable chrysanthemum-imitating decorations just screamed "perfect for little girl's first birthday party" to me. I knew that I wanted to simplify the design though--no pistils, and since these cupcakes will be traveling across the state of Mississippi, no need for the fancy-schmancy presentation on a platter with the pseudo-stems. So here you can see the perfectly styled book presentation, my inspiration ... 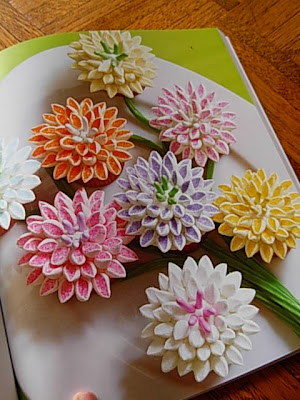 And here's row one of my first cupcake. Although the design of the cupcake is pretty simple, and simple enough in concept (the petals are simply mini-marshmallows cut on the diagonal and the revealed sticky part dipped in colored sprinkles--easy, right?), I found working with the mini-marshmallows a little cumbersome at first. Originally, I thought I'd be able to actually use both halves of each mini-marshmallow. Ha! What was I thinking? I found that you basically need one half to hold onto as an anchor while you cut the marshmallow in half. This process invariably mushes the "anchor" half beyond any recognition--certainly not a petal shape! I also quickly learned that it is important to use a sharp knife, specifically one with a sharp tip. And frequently cleaning off the marshmallow "gunk" also helps make sharper cuts and better looking "petals." As I got going, I got into the groove of it though. But I would definitely say that this cupcake design is a little tedious to construct. I would cut enough marshmallows to construct one cupcake before going back to cutting marshmallows. Looking at the pretty finished cupcakes then helped motivate me through cutting some more petals. 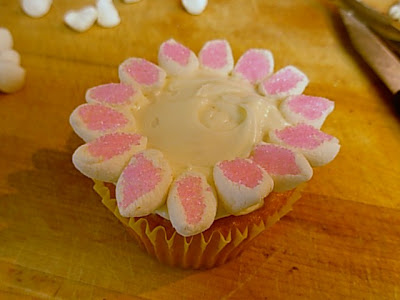 And here's a cupcake with row #2 of petals on ... I could totally see a sunflower version of this cupcake with chocolate frosting and yellow petals, but omitting row #2, don't you? 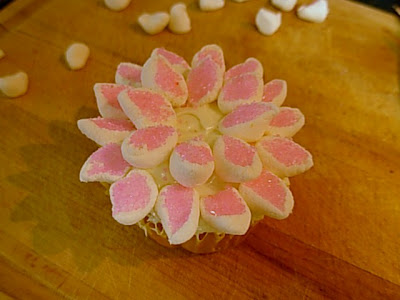 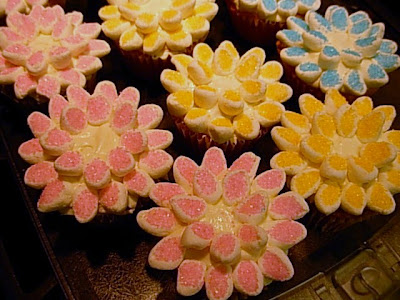 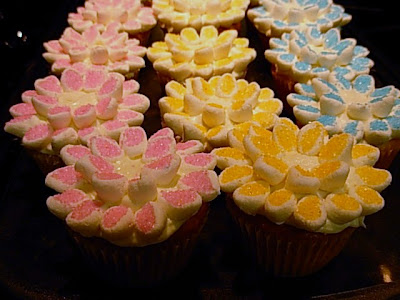 I want to say it took me about two hours for completing the decorating of 14 cupcakes. Like I said, tedious. Can you imagine making enough for a large party? But despite my whining, I LOVE the results. They are sooo neat looking! I would make these again in a heartbeat, and think they would be stunning for a baby or bridal shower. I'm excited to see the reaction they'll create among the party guests tomorrow...
Of course, this minor success already has me thinking ahead to the next holiday/celebration I'd consider making cupcakes for. These snowmen look adorable, and sooo much easier than the flowers I made today! 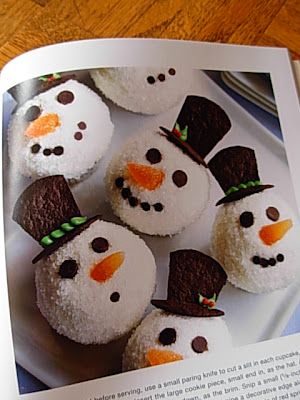 And these "skeins" would be perfect for my knitting buddies! 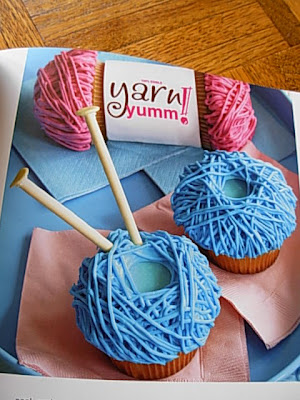