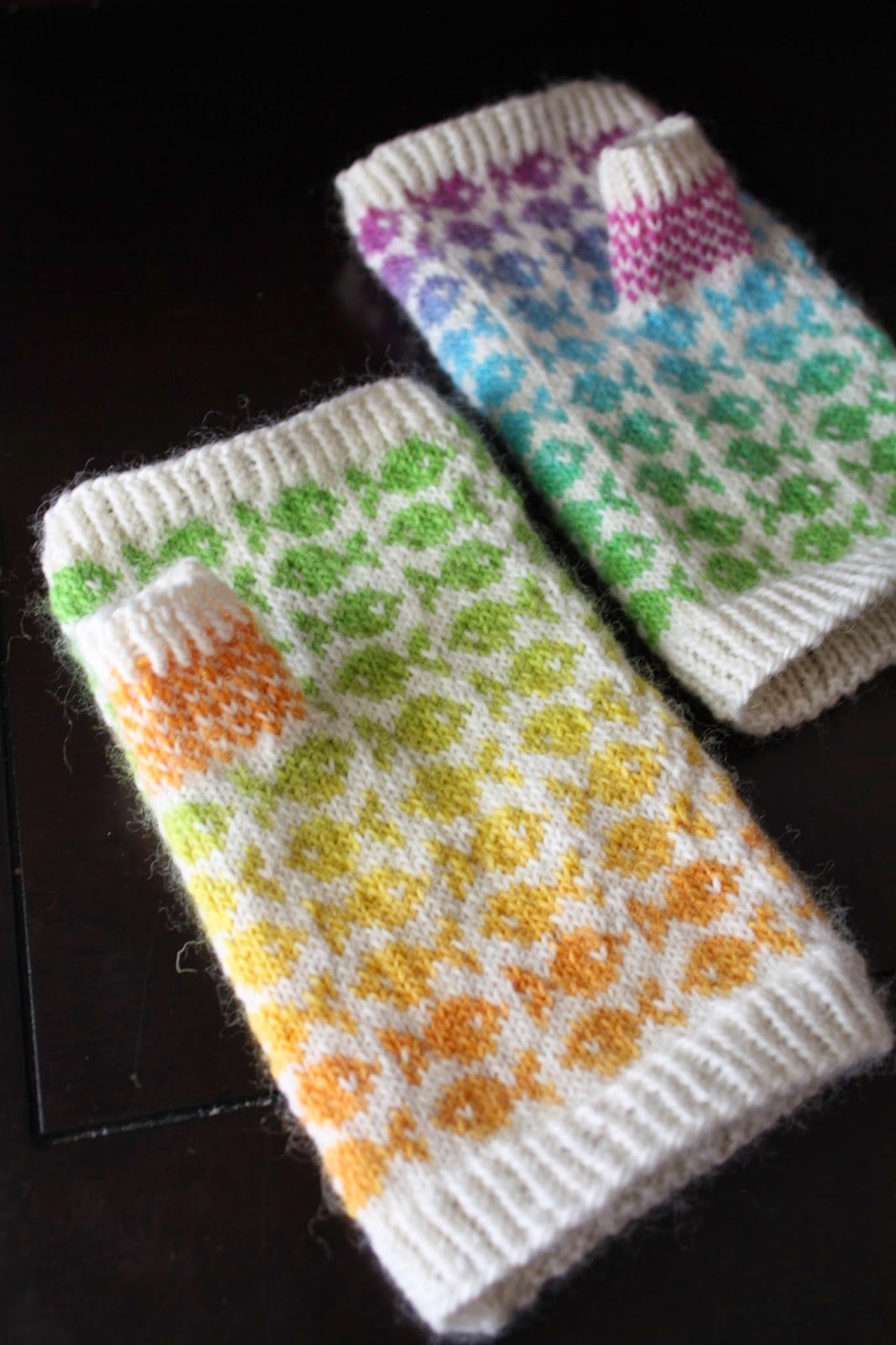 They're done! They're done! They're done! And I loooove them! These are my fraternal twin swedish fish mitts (a SpillyJane pattern, she makes the cutest colorwork mitts!). As I mentioned before, I used Knit Picks Chroma Fingering yarn--which significantly reduced the number of ends I needed to weave in! I definitely have half a skein left, so I'm seriously considering casting on for a second pair! If I knit from the outside of the skein for the first mitt and then from the inside for the second, I may have a closer "twin" set the second time around. I'd also attempt adding a gusset to the pattern, as I've come to the conclusion that afterthought mitten thumbs just don't fit me very well. You can see the awkward pulling of the fabric around my thumb in the last photo.

This was a great way to end the month! This makes two projects that utilized yarn already in my stash, and two patterns already in my library. I was less success on not making new yarn purchases this month ... ahem... but making progress nonetheless! 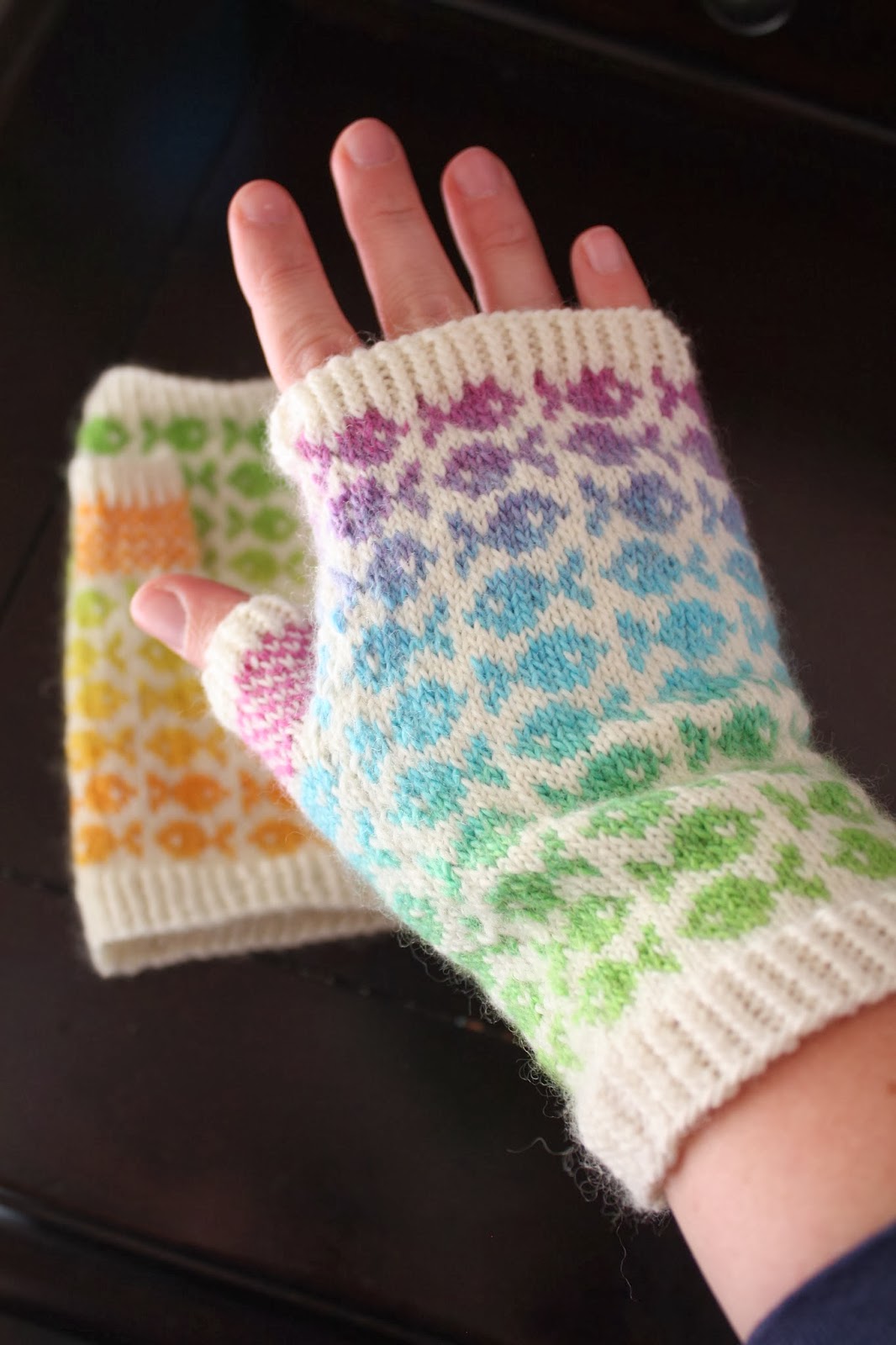 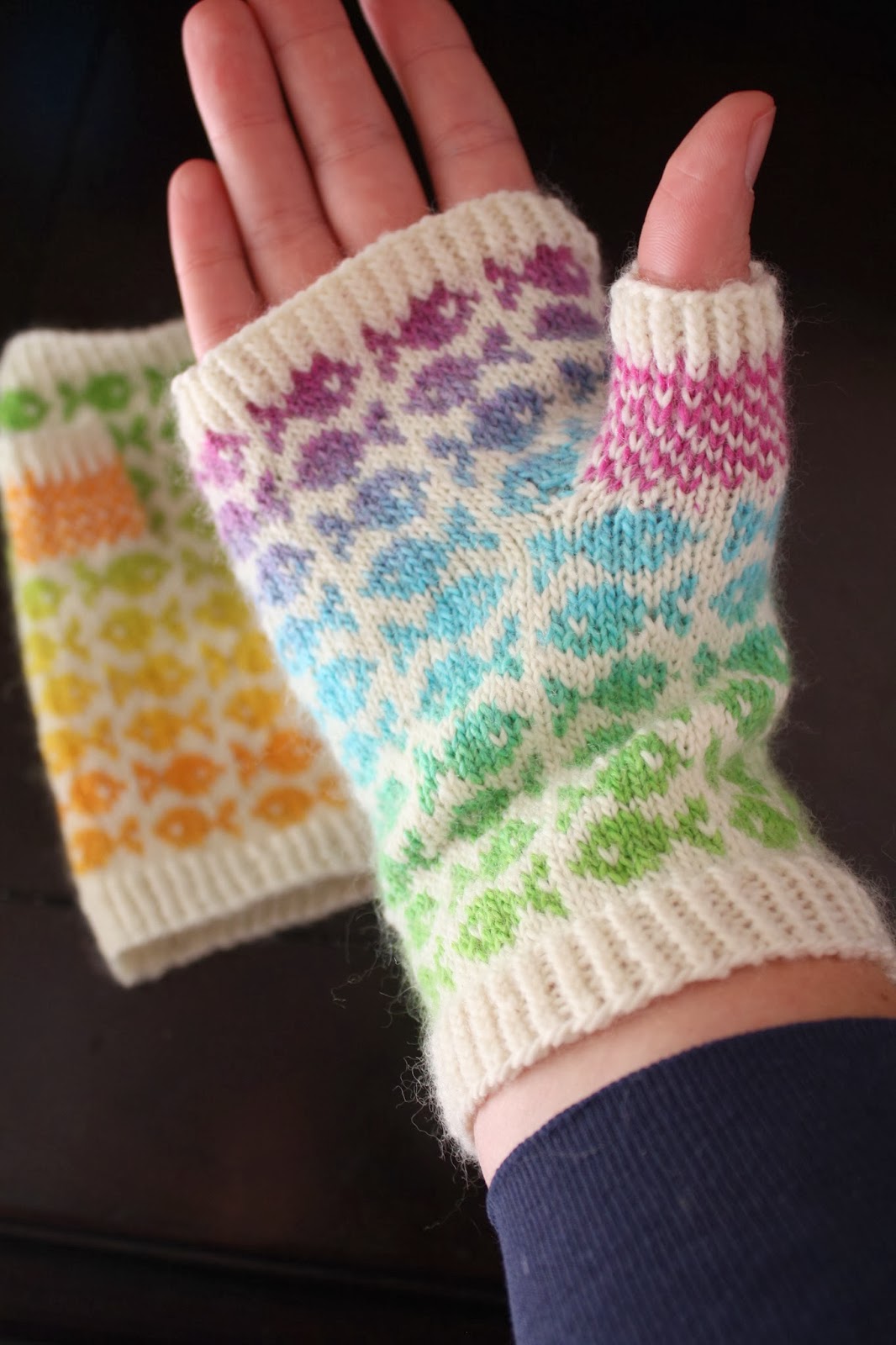 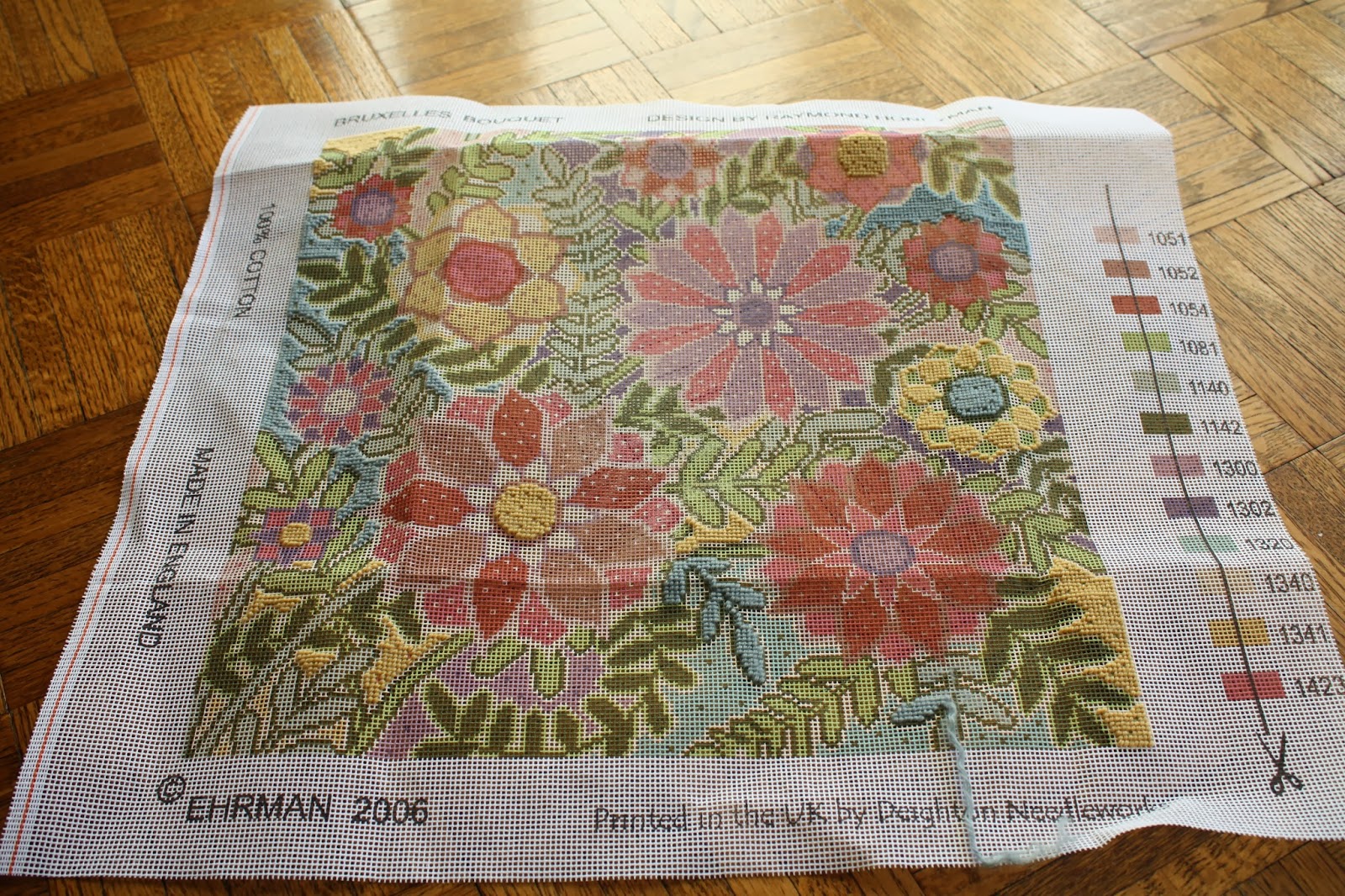 I was ready for a bright, cheerful color so I skipped on to the yellow sections! Still have a big, mostly yellow flower in the upper left-hand corner and some tiny background sections left for this color. Then on to one of the pinks? Either that, or some leaves ... not sure yet! Watch my progress on past Sunday's Stitches posts.
at January 26, 2014 No comments: 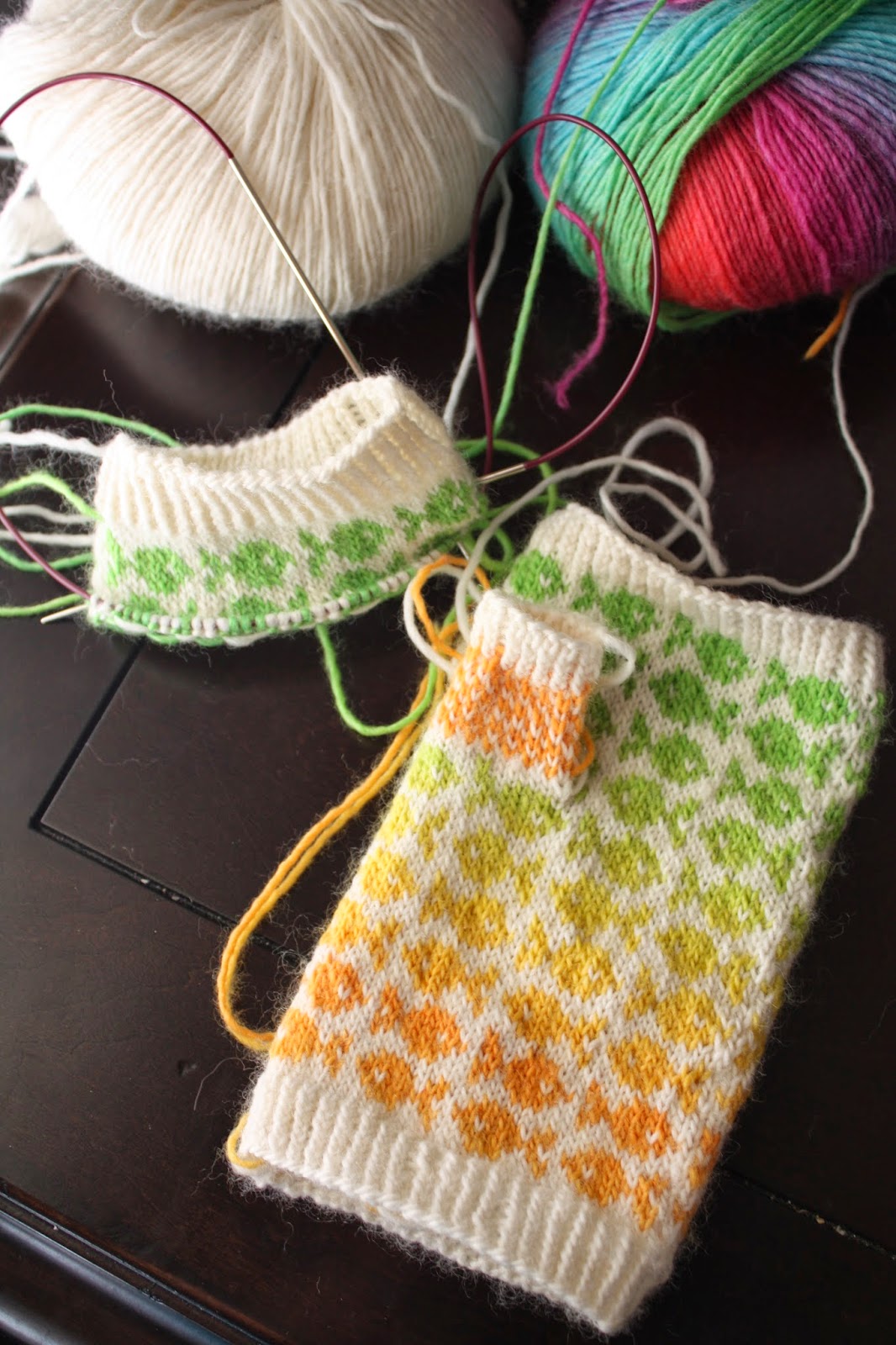 My first swedish fish mitt is done! As you can see, these will end up being fraternal twins when I'm done since I'm using Knit Picks Chroma self-striping yarn. The next color I'll transition to is blue ... and then purple! Totally loving these! :-D 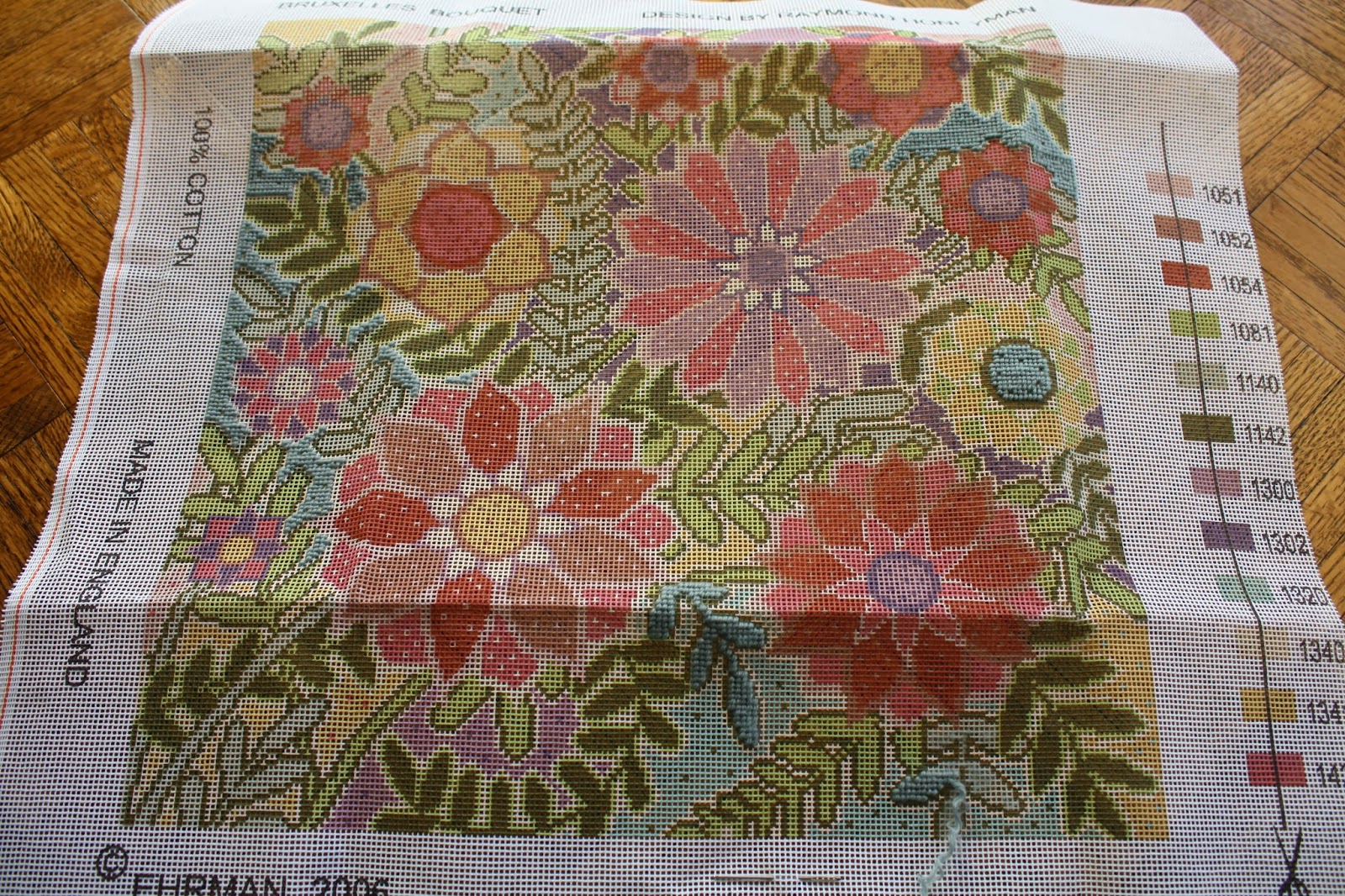 So I got a little impatient with ripping back, so I plunged ahead with the blue ... where I was supposed to be using it! I definitely think this project is going to take me the year to complete, but I'm loving it! Watch my progress on past Sunday's Stitches posts.
at January 19, 2014 No comments: 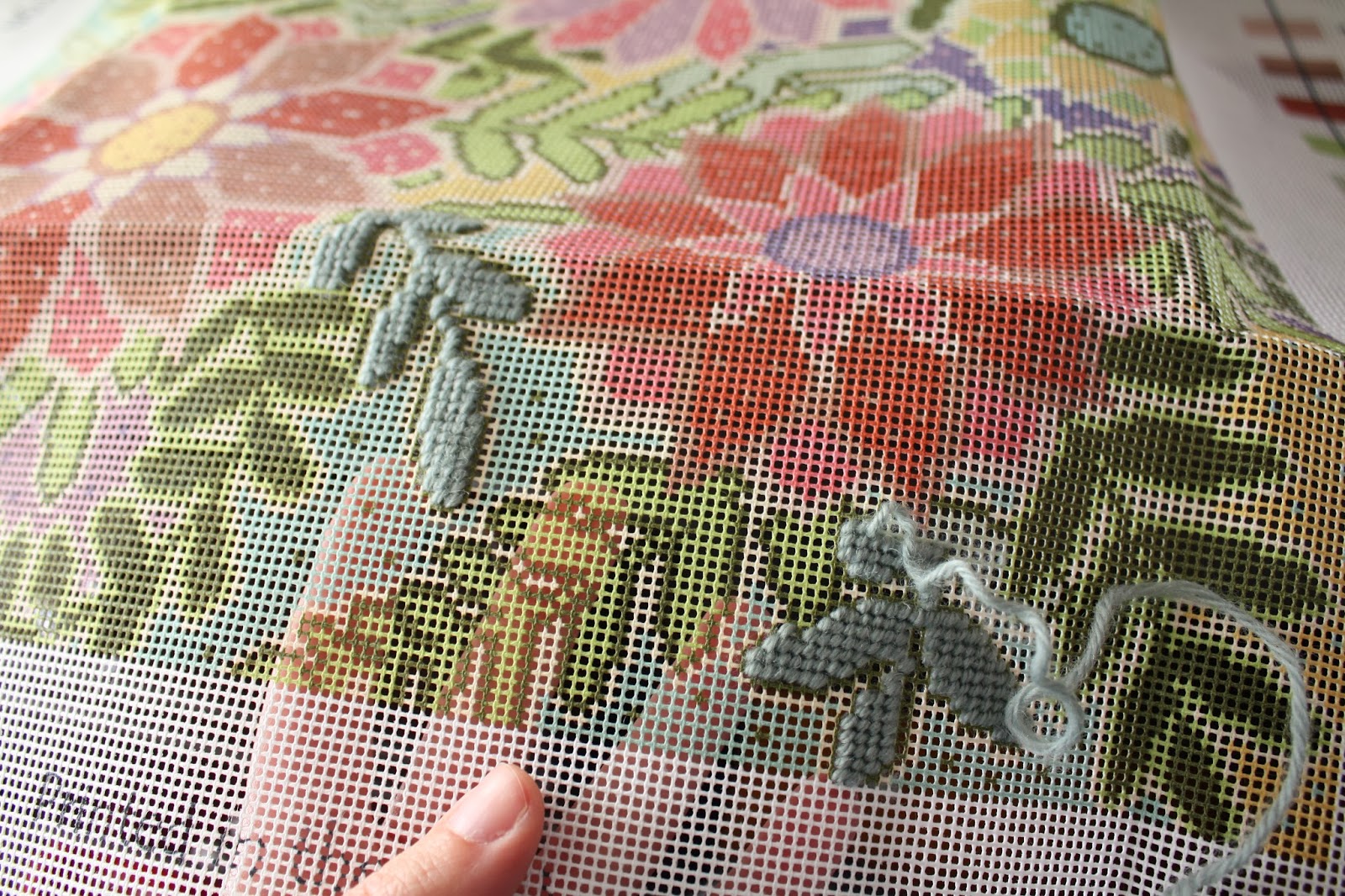 This looks like progress, but don't be fooled ... I was so excited to get sunday's stitches going again that I foolishly opened this kit on New Year's Eve. After sundown. Bad light is an enemy of needlepoint, I tell you! I incorrectly identified the color for this section, and now need to rip back. Thankfully I caught it before I'd completed all the leaves in this color! Hopefully I'll have forward progress to show next Sunday! 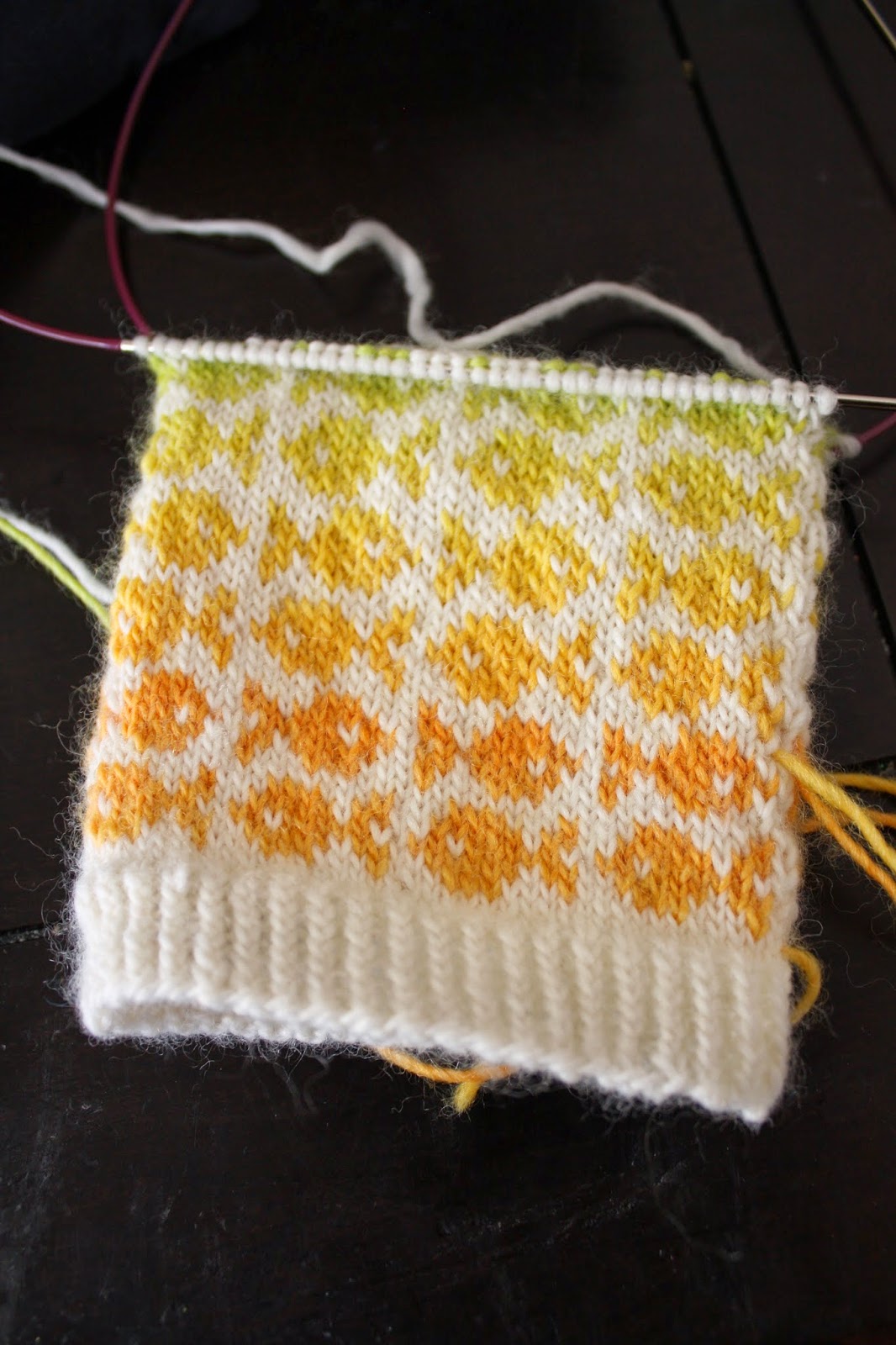 When I look at these mittens, I can't help but sing the "I love fishes, 'cuz they're so delicious" song ... These are SpillyJane's Swedish Fish mittens. A pattern that I have had in my Ravelry queue since May 2010, have owned the yarn for at least a year now, owned the pattern for approximately six months now, and finally cast on for this month. It's probably good I waited, as my stranded knitting skills are much much better now than they were in 2010. I'm using Knit Picks Chroma self-striping yarn, to make the colorwork much simpler. Finishing these mittens is my love your library challenge for this month! Did you challenge yourself to use your library and knit from stash more in 2014? Come join like-minded folks over in the 12 in 2014 group in Ravelry!
at January 08, 2014 7 comments: 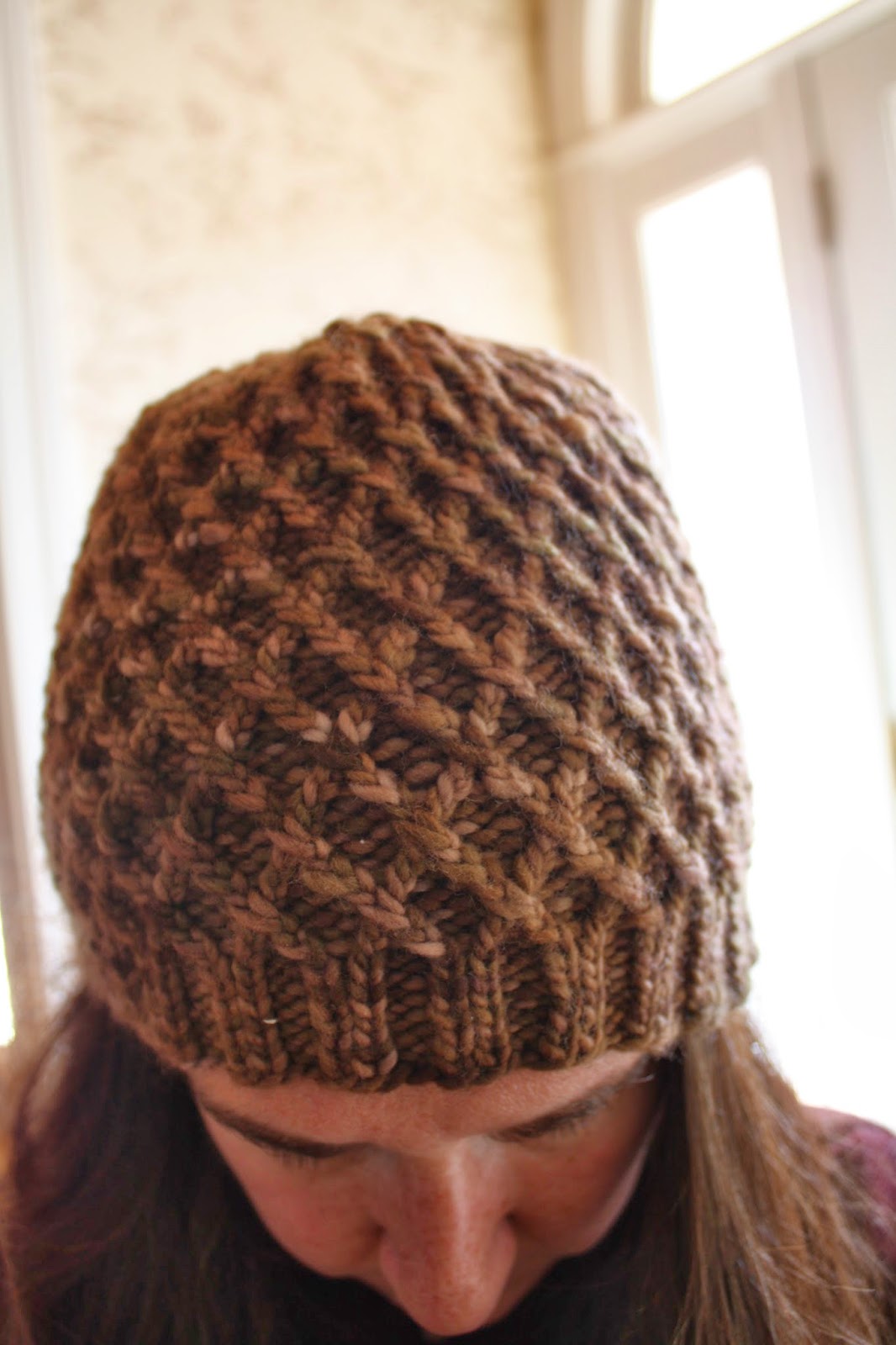 My first finished object of 2014! I'm excited because it helps me make progress toward several of my knitting resolutions for this year! First, this is one of the many WIPs I was hoping to finish this year. I'm not completely certain, but I'm pretty sure I cast on for this hat sometime during the summer of 2012 .... that's right, this project is coming up on two years old this year. I had completed the ribbing and rounds 1-5 of the pattern, so maybe 2ish inches were done when I picked this up last Thursday. Since I didn't use a round marker, I got a little confused as to where to start crossing the cables for the first few rounds but after that it became pretty intuitive. It was surprisingly fast to knit, despite the fact that I did use a cable needle on this one (you cable/move stitches every other row, basically). I finished this up on Saturday! And I loooove it and will definitely be making more. This would be a great gift pattern, I think. So this used up almost one skein of my Malabrigo stash, used a pattern I've owned in my library forever, and moves a WIP to FO territory! That's all three of my 2014 resolutions, folks! Can you tell I'm over the moon?

Pattern: Koolhaas by Jared Flood (link to my Ravelry project page)
Yarn:  Malabrigo Merino Worsted (lost the tag, not sure on specific colorway; used about .75 of the skein)
Needles: Size 8 Knit Picks Harmony's
Modifications: None! 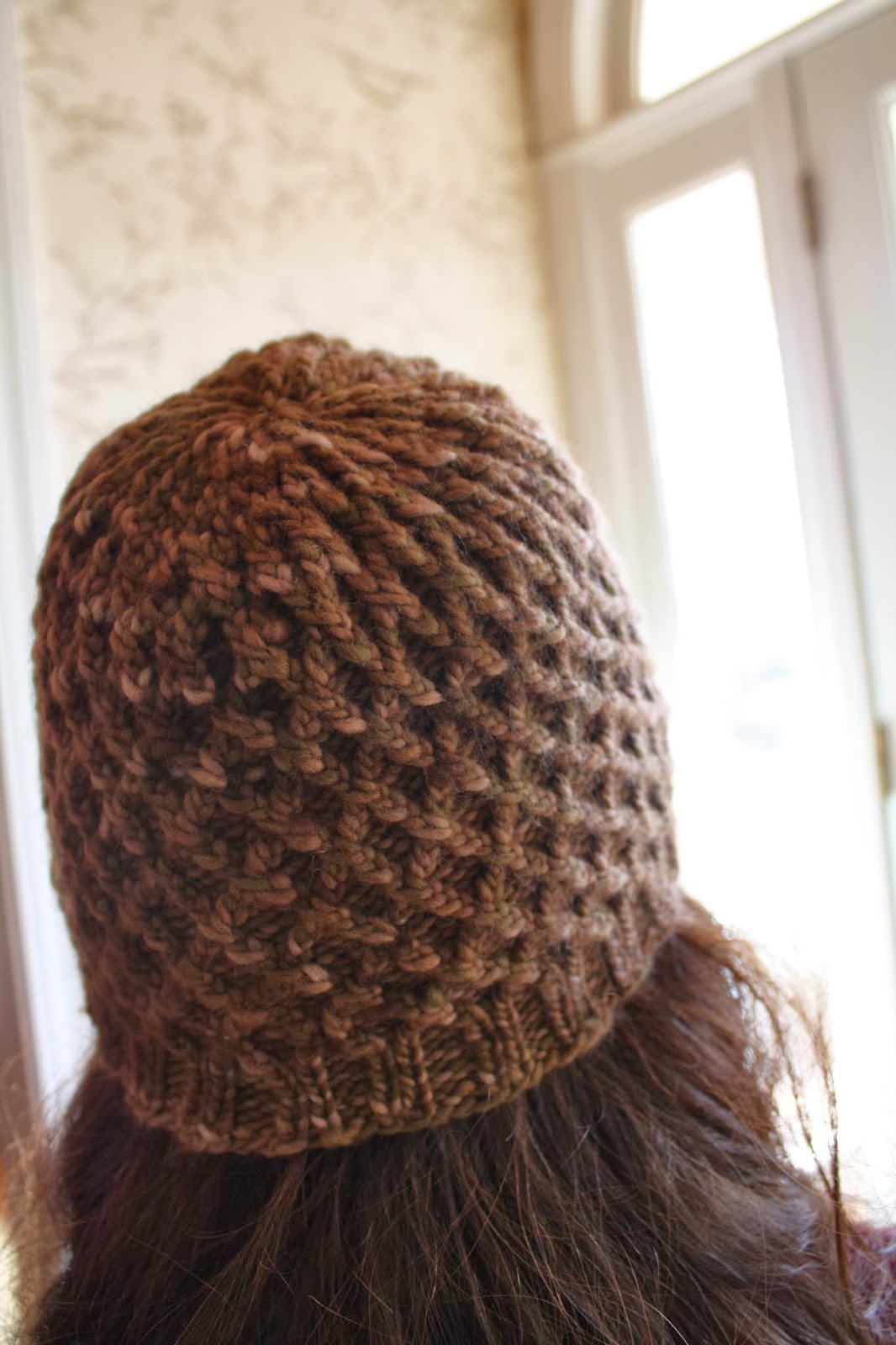 Perfect timing to wear this while braving our below normal freezing temps!
at January 07, 2014 2 comments: