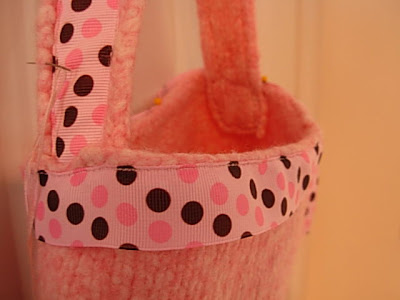 Does this bag look familiar? Yeesh. Felted in August ... and just attaching the straps now. Finishing is definitely my Achilles heel when it comes to crafting projects. I have such a long project wish list that the minute I am thisclose to finishing one project, I jump right ahead to the next. I have a recipient for this cute pink bag in mind, so it's found its way out of my UFO [un-finished object] pile. Hand-sewing the ribbon trim has been surprisingly relaxing! 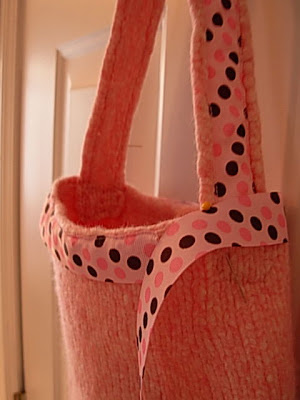 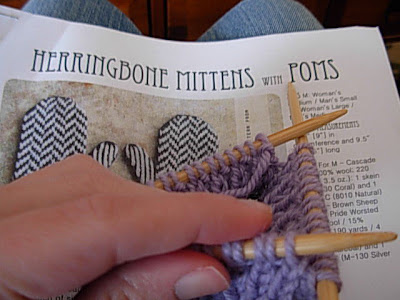 Although I am totally in love with the Tiffany mittens, I decided they'd be a little too ambitious for my first colorwork project. So I've cast on for Elliphantom Knits' Herringbone Mittens instead. The pattern is great--but I'm off to a rocky start. I'm using U.S. size 3 dpn's, but my gauge is still totally off. So I'm going to frog and try size 1's ... if that doesn't work, I'll have to do some recalculating and reduce the number of stitches for the cuff. I don't mind if the body of the mitten is roomy, as long as the cuff is snug! 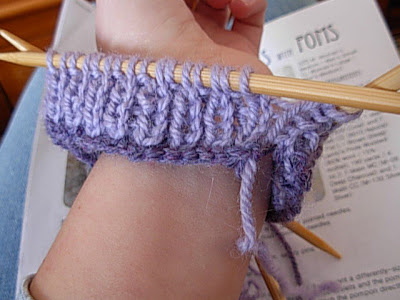 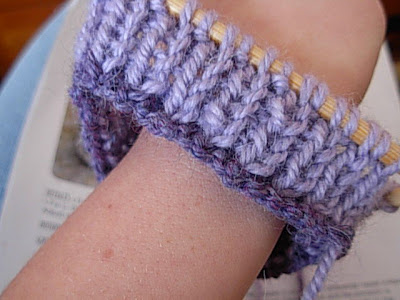 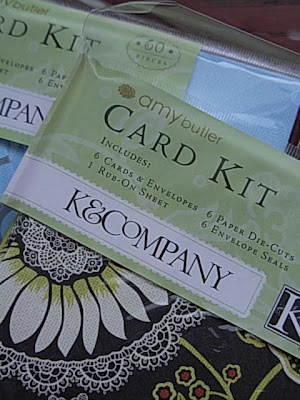 First fabulous fabric and sewing patterns--now papercrafts! I stumbled across these kits near one of the end caps in the Martha Stewart Crafts aisle in Michael's. Martha and Amy Butler? Michael's is really getting their act together! Each kit cost $4.99 ... the only negative is the paper quality. No heavy cardstock here! But it's what you'd expect given the cost (and it is just fine for correspondence). The cards have faux texture, since they're composed of images of her fabric. 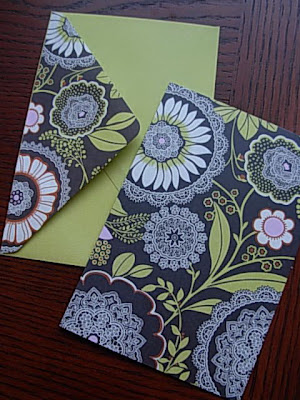 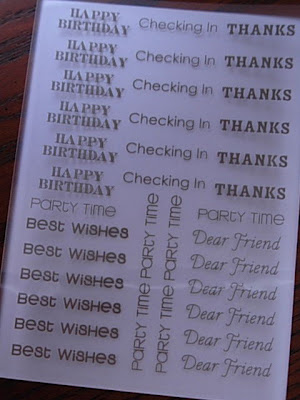 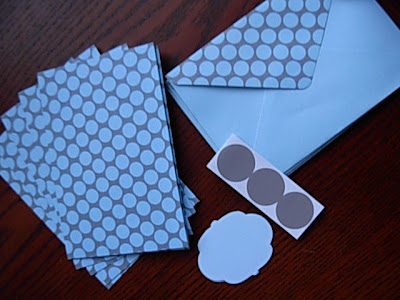 1. knit my first sweater (surf 'n turf, this means you)
2. conquer my fear of my sewing machine (no phobias here, just lack of knowledge ...)
3. dabble with new knitting techniques (colorwork, lace, cables)
4. make another felted animal
5. open an Etsy shop in time for the next holiday season 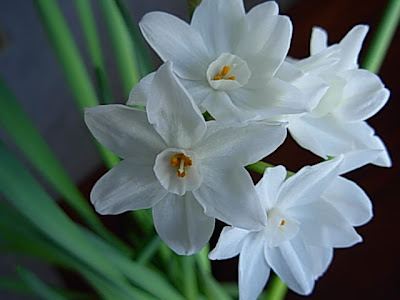 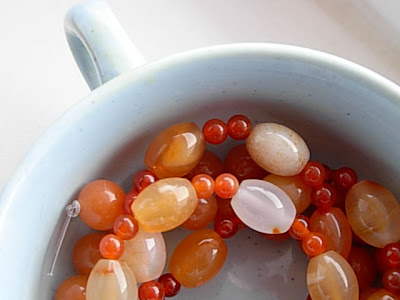 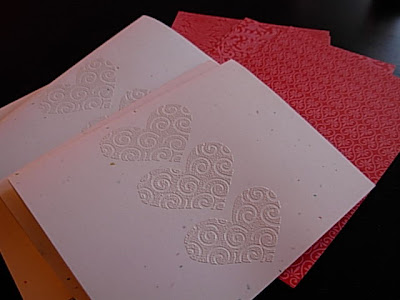 Is it sick that a mere week after New Year's I started dreaming of Valentine's Day cards? And then made them?!?! Yeah, I feel sick. But satisfied. I know I run the risk of coming up with a better idea in the meantime, but now they're done! Tomorrow marks the beginning of a new semester, and my crafting time will reduce to nil, so I chalk this strange behavior up to a crafting binge I've been on for the past three weeks. I keep thinking, enjoy it while it lasts!

Now for the details ... I used a Paper Source heart stamp that worked really well with the thermal embossing. I was worried about the embossing powder sticking in the swirl pattern, but it all came out great! It probably helped that I used a smooth cardstock with no texture. I mixed up the location of some accent strips on the front, and used an assortment of pink and red patterned paper I had on hand--my New Year's crafting resolution this year is to a better job of using what I already have ... we'll see how long that lasts! 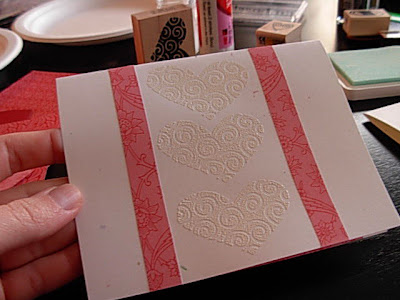 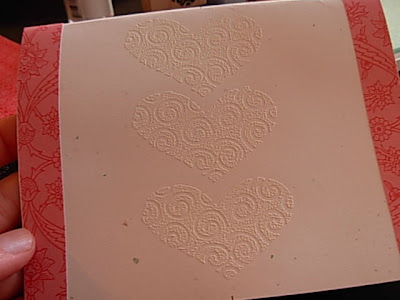 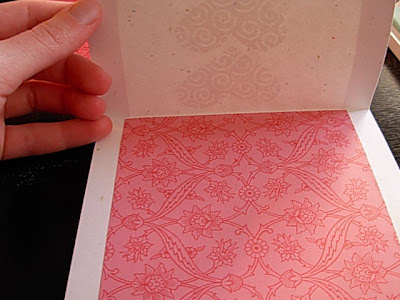 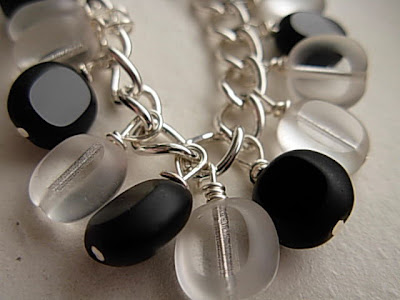 Or gumdrops ... I love the candy-like quality of these glass beads. 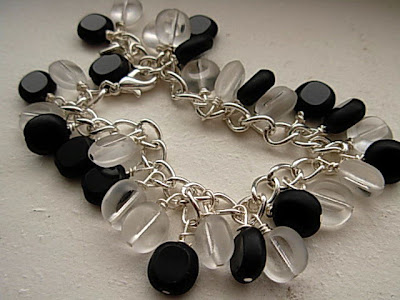 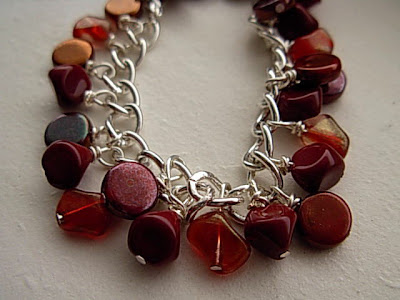 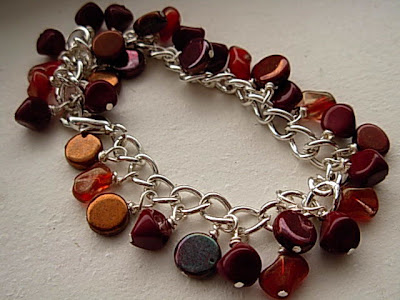 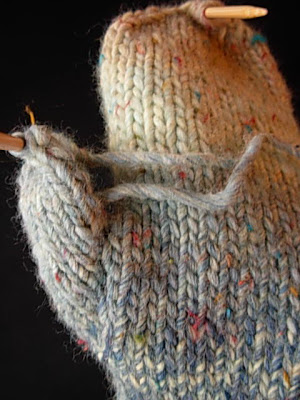 I finished my first pair of mittens the other day, and it's made me mitten-crazy. [BTW, happy birthday, Grandma, you are the lucky recipient of this first pair!] Recognize the yarn? Yup, it's an extra skein from the surf 'n turf cardigan (which is slowly creeping along, thanks to my crafting ADD). I had forgotten how soft the yarn was, and it's re-energized my drive to get knitting on the cardigan! The pattern, "so simple mittens" came from Better Homes and Gardens' "Hip Knits" book, and used almost one skein of Moda Dea Tweedle Dee yarn (80% acrylic, 20% wool). It really was simple, and I recommend this pattern to anyone else attempting their first pair. They're knit from the cuff up on two needles, so you do have one side seam at the end, and really easy increases create the thumb (eventually you put the thumb stitches on scrap yarn/stitch holder while you finish the rest of the body of the mitten). 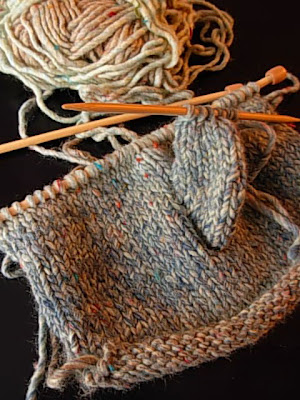 Here's a shot of one mitten, in progress. Sorry, no shots of these guys all seamed up. I had bad winter evening light by the time they wrapped up. 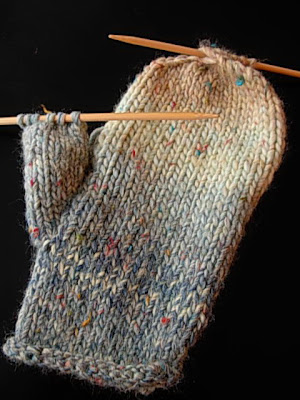 So now I'm itching to make a pair for me, now that I realize how easy they are ... I have two skeins of Ultra Alpaca (one light purple/lilac, the other dark purple) that would be perfect. I'm also tempted to try some colorwork for the first time too... here are some patterns I've been drooling over as I contemplate my options: 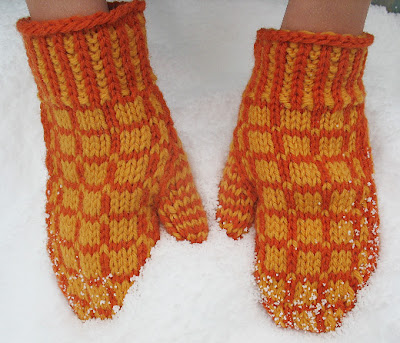 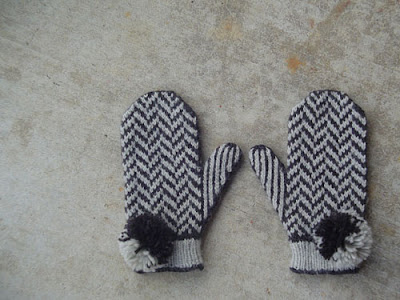 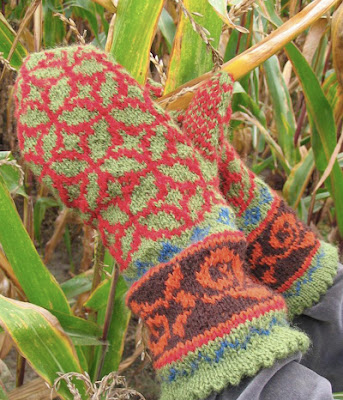