Who would have thought that the second year of a pandemic would be worst than the first, in terms of crafting mojo? Not I. But this chart says it all with that orange 2021 line consistently below the blue 2020 line. I've never mapped my year visually this way, and I can really see how my day job and work cycles influences my crafting energy mojo. January is a slow start--I'm casting on projects and not really finishing things, since they're new cast-ons (I only mark finished project yardage in these charts). Then February is super productive traditionally because that's the month when my favorite Ravelry charity hat knitting challenge and stashbusting challenges happen. And I'm still highly motivated with New Year's energy! March slides off as I'm casting on "big" new projects after the hat-a-thon but not really finishing anything until May-June because April is end of the semester and my overall energy is lagging. Summer starts off motivated and with New Year's like energy, but is short-lived. Knitting in Mississippi in July temps is not appealing, so I usually have another lull in July and August. That's also when I travel, and although I pack projects to work on, I generally don't knit much unless it's long car travel. Once I'm at my destination I don't knit much at all. August-September are typically lagging months thanks to the effort to get the kids and myself back to school with new semester prep work for me. I pick things back up mid-fall when holiday knitting mojo kicks in and I'm settled into the new school year. That August 2020 blip? I participated in a second hat-a-thon that year.
I'm not being fair to myself though, because despite my "lagging mojo" I still finished three shawls, two woven scarves, 28 hats (all but one baby sized), one baby dress, one baby blanket, one finished adult-sized sweater, one toy snake, and three sets of woven dish towels. And my numbers look low, but I have three adult sweater projects that are 60% done (that yardage adds up). And a vest that was a big flop that will never be documented. Ever. Ha! What made the year feel weird was so much time spent feeling "meh" about projects. I've never had such persistent long stretches of a languishing feeling where nothing quite lit me up or got me excited. Of feeling so doubtful and dissatisfied with my crafting work. I'm returning to some of those unfinished projects now and realizing that my mood was really messing with me--I'm easily falling back in love with the projects and amazed that I ever doubted the project or felt meh about it. But such is navigating mental health and the effects of chronic stress in a pandemic. It messes with your head is the understatement of the century ... 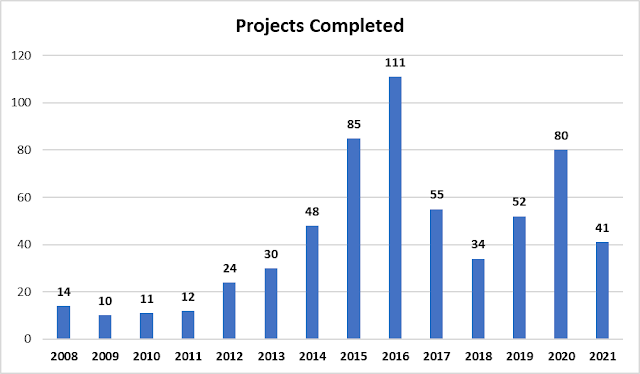 Thankfully I was wise enough not to set any crafting resolutions in 2021 ... which given the variability of my mojo and my mood last year, they would have 100% been a flop! But this year I'm feeling optimistic ...
What are my crafting goals for 2022? 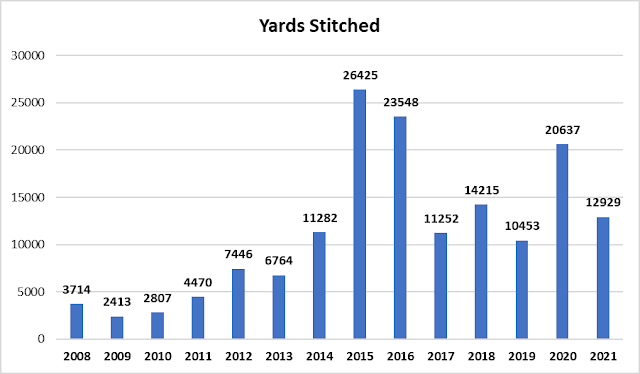