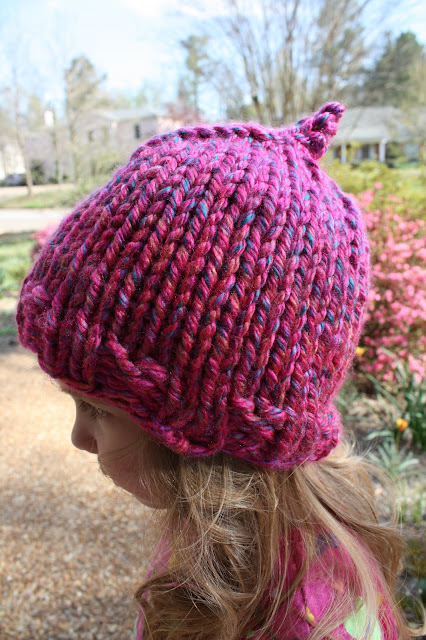 My knitting guild just started a new charity project, knitting hats for children living in an orphanage in a mountainous region of Kenya. I wanted a pattern that was super fast, super cute, and would work perfectly with the four skeins of Lion Brand Hometown USA yarn I had sitting in my stash. But everything I found on Ravelry was designed for adult-sized heads ... and all the patterns in my library were designed for DK or worsted weight yarn. So out of necessity I drafted up my own simple kid's hat pattern for super-bulky yarn. Given the coincidence that I knit this as our azaleas are starting to bloom using the "Phoenix Azalea" colorway, I'm calling this the "azalea hat."

Instructions:
Cast on 36 stitches, join to knit in the round (placing marker to indicated beginning of round).

Begin i-cord to finish top of hat.
Place all four stitches on a single dpn, so that the yarn is attached to the stitch on last stitch on the far left. Knit 1 row. Begin next row as if to make i-cord, but bind off as you knit each stitch.

Weave in ends and enjoy!

Alternate ending: if you don't like making i-cord, draw your yarn through the last four stitches to close top of hat. Top with a pom-pom or leave as is, whichever you prefer! 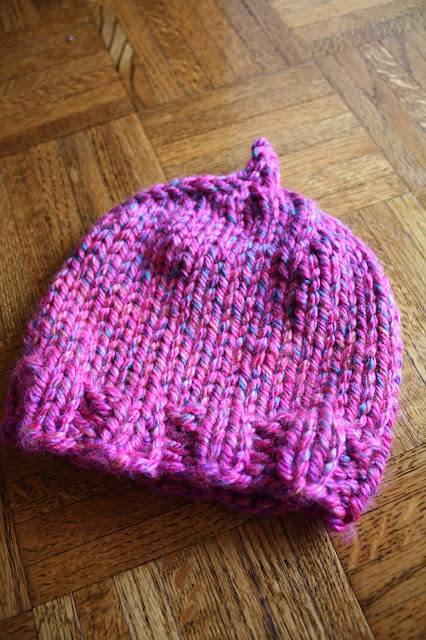 This picture doesn't quite show it, but I love how the decreases make a nice swirl at the top of the hat. I'm pretty sure you might be able to eeek out two hats from one skein ... I have cast on for another hat to test this theory and will report back! 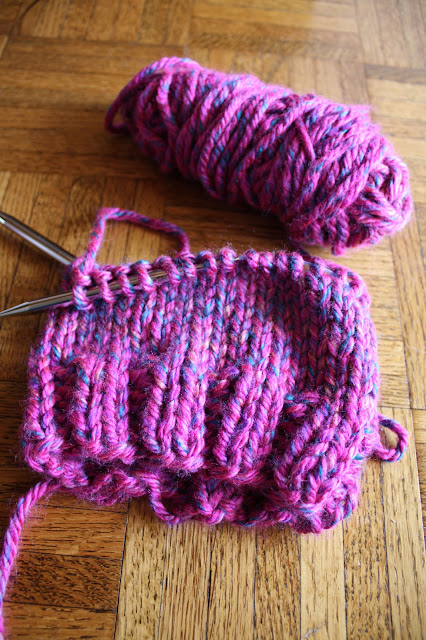 Awwww that is so adorable! This project you are involved in is amazing, go you!

Excellent hat! Thanks so much for sharing the pattern:)

This is a really cute little hat! Necessity is the mother of invention. And, I know the children who receive your hats will be very pleased with all you're doing to help them.

What a pretty hat! That is a great project!